Can you really tell if a man is ready to commit?

I think so. You can also tell when they are not ready to commit.

I remember distinctly feeling very awkward at 27 when my girl friend started talking about marriage and settling down. Somehow in my mind I knew I wasn’t emotionally, psychologically not to mention financially ready for marriage commitment. So I balked or should I say bolted. It wasn’t that I didn’t love her, deep in my guts I knew that it would be a major disaster for both of us. 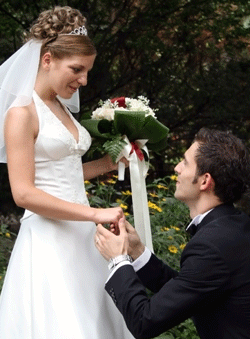 Later in my thirties I realized that I need to get married and have children. I just couldn’t wait. It was some sort of driving force, that propelled me to find a suitable person to settle down with.

There have been a lot said and written about men and commitment. I profoundly believe and know that men are not commitment averse as some women seem to believe. In fact I believe that certain things tend to trigger that need to commit.

It could be maturity. It could be a serious event. A friend on mine who got a close shave with death through and accident wanted to marry the girl he spent the last 5 years with the next month. He realized how precious time and people are. It could be achieving financial and successful goals. It could even be the insistence of the woman that they shape up or ship out of the relationship if they continue to waste time. Some men realize how much a woman means to them after she leaves the relationship to pursue a relationship with another man.

Interestingly the story of Adam and Eve carries a great insight. The Bible story indicated that when Adam named all the created animals he realised that there was no creature that was similar or compatible to him. Somehow after this need and realisation kicked in God made a woman for him. On seeing her immediately he felt a great satisfaction that someone who is similar to him can share with him. In other words if a man do not come to the realization he needs someone to complement him, that guy would not easily commit.

How can you tell he is actually ready and serious without nagging him?

The good news is, unlike what many women believe, you do not have sit around and wait for a man to decide – you can definitely influence the process. You can get a man to start the process of commitment by doing several thinks. Click here now to find out how.

How to fall in love and stay in love